This text describes how to generate KiCad netlists and component-assignments files programmatically using a domain-specific language (DSL) on top of Tcl.

In an earlier page, ways in which KiCad eeschema netlist- (.net) and cvpcb component-files (.cmp) can be simplified were given.

The idea then was to eventually be able to generate both these files programmatically, thus skipping the schematic capture and component-assignment stages.

This can be useful when a project contains repetitive or hierarchical circuitry. Although KiCad itself has a concept of "hierarchical circuit", it can be cumbersome having to spend space on schematic-pages for very similar circuitry, and having to provide glue-wiring between these blocks.

Instead, circuits and subcircuits can be modeled using something resembling procedures and macros in programming languages - which is what this page is about.

In the KiCad workflow, eeschema is the schematic capture tool, and cvpcb is the component-assignment tool.

In generating everything up to the layout-phase programmatically, I chose to merge schematic symbol and assigned footprint in something called a "physical component".

The idea here is that abstraction can be used instead, to accomplish a better separation between footprints and building-blocks used for modeling. (See the NPN-transistor abstraction later on for an example.)

Learn by example: an inverter out of discrete components

A logic inverter can be constructed out of resistors and a transistor as follows:

caption inverter out of discrete components

In the normal KiCad workflow, the resistor and transistor could be drawn in a hierarchical circuit, which could then be instantiated multiple times.

Using the tool described here, it can be described programmatically instead:

This defines a new part called "inverter" to be used in a circuit-description. (I chose for a verbose sort of language, with risk of making it look like LOLCODE.)

So, the "inverter" clause creates a new super-component as shown in the picture.

The inverter defined above is called a virtual component - simply said, it does not occur in the BOM, because it consists of other components.

As an example, in the description of the inverter above, a physical component "resistor_100" is instantiated as base-resistor (Rs):

The definition of "resistor_100" is as follows:

This is where KiCad starts to leak: during schematic capture, the user doesn't want to be concerned with the physical choice of transistor, and likely wants to use a generic "NPN transistor" symbol for all NPN-transistors. This symbol has its pins numbered from 1 to 3.

However, different physical transistors have different packages, and even within a package (e.g. SOT-23), transistor-terminals may not always be exposed at the same package-lead.

DISCLAIMER: I may be misunderstanding the KiCad-way, but fact is that there exist e.g. different "SOT-23" footprints to accomodate for differences in pin-numbering. I can't see any way of making this work without an additional mapping-layer, which KiCad to my knowledge does not have.

...the choice was made to create that missing abstraction-layer. That is, physical components can be wrapped inside another component-description with the only effect being a renumbering or renaming of the pins.

As an example, the given inverter was described using a generic "transistor_NPN" component:

This subcomponent has pins named b, c and e with obvious meanings, and is described as follows:

Thus, underlying each instance of "transistor_NPN" is a physical component (BC847): 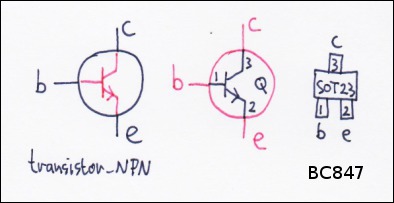 (This method has shortcomings too, but works reasonably well for simple but large schematics.)

The complete description of inverter, followed by a single instantiation (as U1) and instructions to write netlist and component-assignments file looks like this:

What's great about this, is that this is valid Tcl code! In other words, parsing of the DSL is done implicitly.

The resulting netlist (_*.net_) generated by the tool looks as follows:

As can be seen, top-level names from the circuit-description such as "output" and "ground" occur as net-names in the netlist. This helps during the layout-stage. (Internal nets are not named, but each net is always given a unique code.)

The refdes-naming (e.g. "U1_Rs") gives a hint as to the location of the component in the circuit-hierarchy. This also helps while layouting, making it easier to group nearby components together.

Resulting component-assignments file is as follows:

LOLworthy anecdote: apparently my KiCad-version (2013-may-18 stable) cares about whitespace.

(spot the difference). I am guessing this is fixed in more recent versions.

The ratsnest when reading these files into pcbnew looks like this after moving components around a bit: 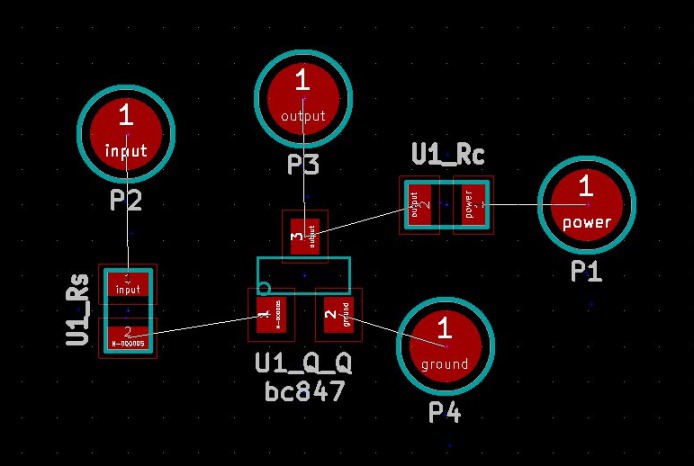 Not too pretty (lots of globals and very imperative), but it works: