WARNING!!! This project uses high-voltage mains electricity. Excercise extreme caution if you plan to carry out this project on your own. Mains voltage can kill

A hotplate is a useful device to have in any workshop, it can be used to solder and de-solder SMD boards quickly, heat liquids, solder over large areas that a hand-held iron just wont cope with, or simply to keep your coffee warm on those late-night projects.

My primary concern about this project was whether the iron could reach sufficient temperature to be of any use (particularly melting solder), however a proof-of-concept test revealed that it could both exceed the required temperature, but also maintained this temperature for quite a while after power-off.

The main component of this project is an old clothes iron. The best type to get is a non-steam iron, as these have a completely flat base without holes (where the steam would come out). I acquired one of these from my mum, who had one laying around in the back of her cupboard underneath some sex-toys, but you could probably pick one up from a car-boot sale or yard sale for a few pence).

Next you need a base to mount the plate on. since a clothes iron is designed to be hot-plate down, you will need to mount it upside-down on some heat-resistant material. For this particular iron I was able to use a part of the iron itself.

Control circuit. I'll be coming to this a bit later, but the idea is to maintain the hotplate within a narrow range of a pre-set temperature.

The initial proof of concept model was quickly thrown together with little safe-guard for safety or control. The 1000w heating element is wired directly to a plug, the only control is the switch at the plug socket. Initial testing of the plate was carried out by placing a piece of solder on the plate, and the plate was switched on. The solder melted after about a minute and the power was switched off. At this point I placed a spare SMD board on top of the hotplate, and within a few seconds was able to remove all the components neatly.

23-07-2009 Being bored one night I started building a controller for the hotplate. Lacking some vital tools I improvised and used a gold metallic pen as an acid resist (I was actually somewhat surprised to discover that it was in fact acid-resistant), the board is pretty rough, but it does the job. There is no actual controller on this board, that will be done on a separate board, this just supplies the +12v for the relay, +5v for the logic and of course, has the relay to power the hotplate on/off, and a simple temperature sense circuit.

Here is the (unfinished) board; originally it was to just have a 5v regulator on board but this didn't provide enough juice to flip the relay, so this was replaced by a 12v regulator, and some copper track was later cut by hand to accommodate a second regulator running at 5v. 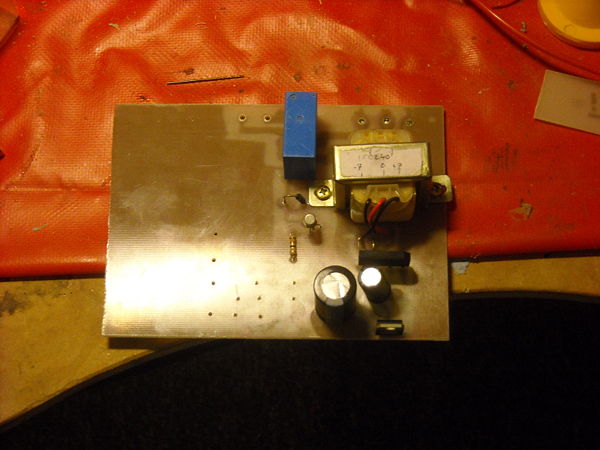 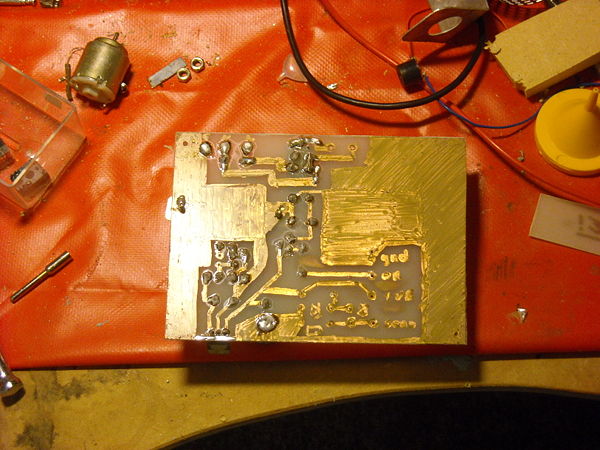 Yes I know it looks like a 5 year olds attempt at "my first circuit board", but it works... at least it did after a few modifications. observant fellows will notice that i cocked up around the relay area, with the heater output in the "normally on" position. This simply would not do as a failed controller would cause the heater to go into overdrive and probably burn out whatever I was working on. Some modifications with a dremel and fancy soldering solved this, and it is now in the "normally off" position. Pics will follow at some point of the modified board.