A man with one watch, know what time it is. A man with two watches are never really sure.

This goes for temperature measurements as well, in my collection I have 5 ( mobile ) sources of temperature, only randomly they show the same. Time for some poor-man's temperature calibration :-)

First, some basic facts that are easy overlooked:

Good old Y = Ax + B. We meet her first when we were 8 or 9 years old, and she has been with us ever since. Sometimes we see her and admire her, sometimes we hate her, most of the time we don't notice her, but she is always there.

Y = Ax + B is a very crude and linear error correction, but for this method, we have nothing better as we can only obtain 2 data points we can somewhat trust. It has some drawbacks, naturally, one of the most obvious is non-linearity of the item we are correcting, we simply have no idea the response of the sensor is linear, exponential ( to X degrees ) or shaped like 80's beloved TV-animal, Flipper.

As you may have guessed, we are going to calibrate our thermometer at 0 C and 100 C, as those are household items that can be re-created to some level of confidence.

There are many tutorials out there for making a proper ice bath, as the 0 C calibration is called. Google it :-) Important notes are again settling time of sensor and stirring the icy water to make sure it is at 0 C.

100 C is much easier to achieve. boil a pot of water, an electric kettle will be sub-optimal, as it switches off when boiling. Be sure not to touch the bottom or sides of the pot with your sensor and be sure to let the sensor stabilize in the boiling water.

I gather results from my 5 meters:

I measured a few times, with at least a few minutes between measurements. The naming speaks for itself, "Deviation" is ( max - min ) / 2, the distribution is somewhat symmetrical so why make it complex.

All 5 sensors were placed within 20 cm of each other with no air-draft felt, they *should* read pretty similar...

From this, a graph was born.

Wow much lines, such colours - yes, well the important bits are this: red = average of all but TC and TC corrected. The brown one at the top is the Thermocouple before correction applied, is is clearly an outlier, but when corrected ( thick black ) it becomes more centred in the data-set and follows the average computed from the 4 other measurements. The 4 are presumed to be NTC's of dubious past and quality, but I do find some conciliation in the fact that they on average agree with our freshly non-traceable calibrated thermocouple. 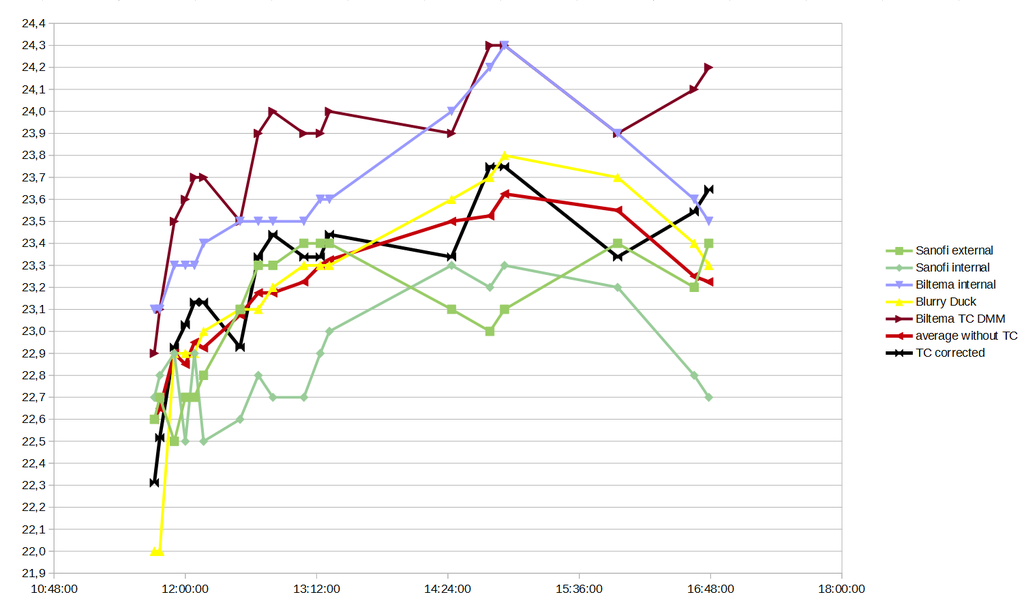 Oh accuracy, thou are a heartless bitch - that is why we invented uncertainty, the frisky next-door entity we work on and apply when accuracy is being a PITA.

A complete budget for the uncertanty of all the above is rather pointless, as we have no specs. of any sort for anything but the DMM + thermocouple. We can however stick to one decimal point and see the specs for the DMM + TC says "+/-3% + 5 counts" - the resolution of the display in the range used is 0.0 C but what the range really is, apart from within 0 and 100 C, and if the 3% is of the reading or the range, we don't know. Nor do we have any info on long term stability of the meter and so on.

Time to make assumptions then:

Combined and with an assumed square distribution, this gives us a total uncertainty of:

Notice how the end result is less than half of the +/- 0.5 C, this is due to the conversion between rectangular distribution to normal/Gaussian distribution, this also goes from 100% ( rectangular ) to a confidence level of the result at 95%. Same goes for at the boiling point, as the estimates of contributions are the same ( how lucky was that!?) we get a result of 0.2 C as well.