NOTE: this page is copied here because this is (sort of) electronics-related - the original page is here.

This page demonstrates a bit of software for emitting debug-info from an embedded platform.

After testing it on a PC, it is used to send debug-info over SPI from an Atmel AVR microcontroller, which is then decoded on the host-side using a Bus Pirate tool.

(Donkey-pic was borrowed from this site.)

A common risk around here is the following scenario:

The Bus Pirate from Dangerous Prototypes was such a gadget; it has been lying idle on a shelf for about half a year, without ever being used.

A solution to this which seems to work most of the time:

The "problem" in this case was to have debug-/trace-info emitted from an embedded device, fast, simple, and fool-proof. This debug-info would then be decoded on a host through a serial connection.

I chose SPI as debug-interface. It offers a full-duplex, synchronous serial bus.

SPI is very easy to implement in software, is already implemented in hardware by a lot of microcontrollers and COMs, and uses standardised clock-polarity and -phase or mode-number conventions to describe clock- and data-line behaviour.

What I want, is an interface that...

Compared to I2C, SPI is simpler and has less restrictions:

I think I2C is nice for an actual multi-node bus, but overkill in my case.

Why not use an UART?

Emitting debug-info using an UART is pretty simple. However, ...

I happen to use a Rigol DS1054Z, which has software-options (sold separately...) for decoding I2C, SPI, UART-serial and probably more. 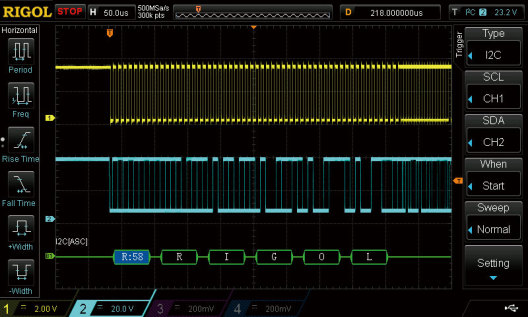 An advantage of using an oscilloscope is that you can see the actual signal as well as the decoded data. (A debugging-mechanism should be reliable, and poor signal-quality can really ruin your day.)

A disadvantage is that you might have to transfer logged data to a PC for further analysis and backup, in case the scope's features w.r.t. serial decoding are too basic.

I have almost no experience with these devices.

I can imagine they are not as transparent as UART-to-USB bridges to use from software, since SPI-configuration (speed, clock-polarity/-phase, master/slave role assignment) may not be offered by the OS in a standard way. (Compare this to programmatically configuring an UART w.r.t. speed and framing, which is offered by all common OSes.)

The Bus Pirate is a multi-functional tool that can, among many other things, act as an SPI-to-USB bridge.

At the host-side of such a bridge, raw data can e.g. be displayed or streamed to a file for analysis, using your favourite software-tools.

The software presented here basically consists of only 1 macro and 1 function to emit debugging-info:

Only the formatting of debug-values and the concept of "debug-message" is implemented. The user must implement the following underlying functions for emitting raw bytes and message-elements:

For example, when using SPI to emit debug-values, these functions could control the CS/SS-, SCLK- and MOSI-lines.

The "dbg_trace"-function was made later, and only exists to compare code-size between function- and macro-implementation.

where "format" specifies the way in which debug-values "val1", "val2" etc are emitted.

The format-string consists of letters, each indicating the width and type of the argument at that position:

More examples and output on PC- and AVR-platform follow later.

The "DBGTRACE" macro is similar to "dbgtrace", except that it doesn't require a format-specifier and is much more flexible w.r.t. emitting arguments.

Apart from "datapointer-and-datasize"-tuples, all arguments passed to "DBGTRACE_" are automatically converted to the appropriate binary representation:

Note that by "array-type arguments", actual arrays (that is, compile-time constants) are meant, not pointers.

"Pointer-to-data" arguments are handled differently. Because the compiler has no way of knowing the number of bytes to be emitted, this number has to be given by the user. Macro "DBGREGION" is used to pass these datapointer-and-size tuples to "DBGTRACE".

Example of using "DBGREGION_" (the two macro-instances do exactly the same):

If interested, see the source of file "dbgint.h_" for what I thought was a rather clever way of looping through varargs macro-arguments. (Not my own idea.)

The mechanism behind "DBGTRACE_" is that of C11's generic selection.

A generic selection is a compile-time mechanism, evaluating one out of a number of expressions based on the type of a given argument.

As an example, the following macro...

used in this code...

Note that both literals and variables (or any expression, for that matter) may be passed to the "PRINTTYPEOF" macro, as long as it is valid C. (The "__Generic"-construct is not_ a macro, and thus its "case-expressions", even if never evaluated, must still be valid C.)

Here is another nice page with examples of generic selection.

(BTW, in the above definition of "PRINTTYPEOF", the result of the generic selection (a string-literal) can not be concatenated with another string-literal - hence the duplication of string "Val is a ". I think the reason for this is that string-concatenation happens in an earlier translation-phase than the evaluation of generic selection.)

To run the debug-trace code on a PC, 4 underlying functions have to be implemented in a way that makes sense for a PC-platform:

As an example, consider the following definitions:

In this case, the following debug-trace...

has the following output:

Actual use on Atmel AVR

My setup for doing debug-tracing on Atmel AVR looks like this: 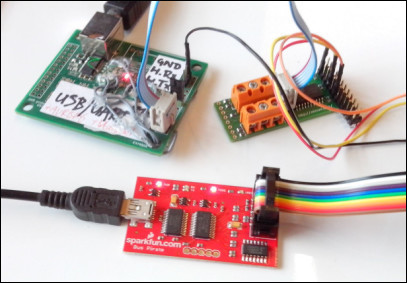 A LED-matrix driver I made a long time ago was the nearest-by thing that could run AVR-code: 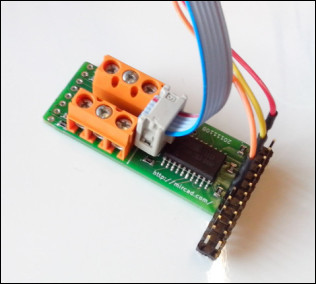 It is basically an ATtiny2313 on a board, with a header soldered onto it. (This thing was originally connected to an 8x8 LED block.)

Apart from a ground-connection (through the programming-cable), the 3 coloured wires on the right going off to the Bus Pirate, take the function of CS/SS, MOSI and SCLK. 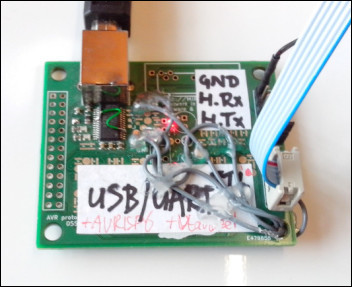 is basically an FT232RL soldered onto an universal AVR-devboard I made a while ago. See how professional it looks with the hot glue, messy wires and handwritten text.

This was the first time I used this tool. You can talk with it using a terminal-emulator at 115k2 8N1.

About the Bus Pirate tool

I guess I like this tool - it can save a lot of time getting something to work, fast. Then again, the support/documentation is... questionable.

Perhaps I am too spoiled, expecting coherent documentation to exist for a mature product - I don't know. Documentation seemed to be all over the place. Admittedly, all over DP's site, not the entire internet. I wanted to contact them about this, but the site's contact-link didn't work. Oh well.

One flaw I noticed was a mismatch between colours of supplied ribbon-cable and colour-names in firmware: 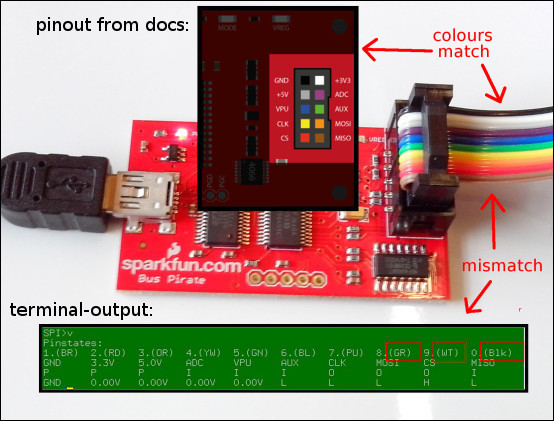 Why anyone would put something as volatile as the colour of cable strands in firmware is beyond me, but anyway, so be it. It would also have been nice if the actual pin-out was printed on the PCB itself.

The tool can operate in one of several modes, which can be selected by entering "m":

At power-on, all I/O-pins are put in hi-Z state, which is a Good Thing.

For testing the software, I chose the SPI-mode, and when asked, configured it as follows:

where it displays any traffic within CS/SS-enabled periods.

with the same debug-trace as earlier...

is sniffed by the Bus Pirate as follows:

this is pretty much the same as the corresponding PC-output...

It would have been nice if the Bus Pirate could print newlines after CS/SS was released, since it already has a concept of "messages" or "bursts".

To do this, I compiled code with 1, 2, 5, 10 and 20 instances/calls of a simple, medium and complex debug-trace, both for function- and macro-implementation.

The same C-definitions as given earlier were used once more:

Result is displayed below. The number of function-calls (solid lines) and macro-instances (dashed lines) - on the horizontal scale - affect the resulting binary code-size (vertical scale) as follows: 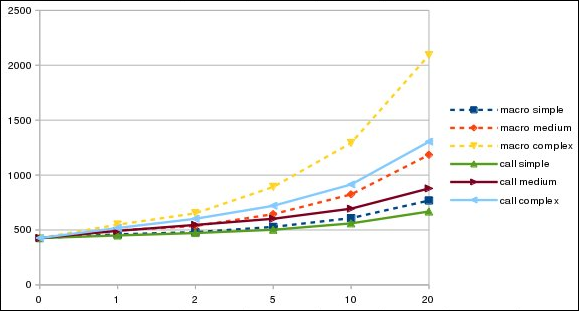 As can be seen, function-implementation for similar behaviour is always smaller in terms of code-size, but it doesn't make a big difference. (I forgot to take into account the space taken up by format-strings for function-calls; in a real-life situation, that will of course have impact.)

Given the fact that using trace-macros are so much easier, I think I'll use macros whenever possible.

Sorry for the bloat - but I would like to avoid linking to such text-files, when I might as well include them. So there.