High voltage - Voltage at the output end of this circuit exceed the maximum safe limits for sticking your tongue on it. Seriously though, we're talking a few hundred volts which could quite easily kill you.

Moderate current: During testing I had this baby sucking up over 8Amps from my power supply when under load, and fried a few components during prototyping. A few resistors actually CAUGHT FIRE. Components that feed the transformer will need to be beefy and/or attached to a heatsink, and rated to withstand high constant currents.

I decided to have a go at building an inverter to push out ~240V AC from a 12V source. My 12V source is a trusty old computer PSU, although I suppose this should work just as well from a battery.

The idea behind it is fairly basic: generate a 50Hz signal to drive some transistors to switch the 12V DC source on and off, and feed this into a step-up transformer (1:20 ratio). The transformer im using was pulled from an old 750VA UPS, so it's designed to do this job. The primary has a centre tap so i'm using a half-bridge design here, I might have a go at building a full-bridge when I get some P-FETs in but for now im using two P60NF06's as the drivers.

Originally I tried switching these with a square wave generated from a 555 running at ~50Hz, this worked, but the output waveform was poor and full of harmonics, it struggled to light a 60W light bulb. I figured I would get much better power throughput if I used a Sinusoidal input, so I grabbed a few LM324's (Quad op-amp) and set to work.

This final design uses only one LM324.

The 5v regulator runs the LM324 (I figured it would run smoother if it had a dedicated stable supply free of feedback from the toroid), with a voltage divider providing a virtual ground at 2.5v for the op-amps to reference. This negates the need for a dual-rail supply and is something I can get away with here because the op-amps wont be sinking or sourcing any significant currents to the virtual ground.

The first two op-amps form a quick and dirty sine wave oscillator, for its simplicity the output it generates is surprisingly clean, and close enough to 50Hz (Actually its around 40Hz with the components I’ve used but that's just fine for testing).

The frequency of the oscillator can be calculated as F=1/PiRC. With the components I used it's a little on the high side... it comes out to about 67Hz, although in practice this was a little lower.

the third op-amp primarily acts as a buffer to prevent loading to the oscillator that could distort the signal, however I have also included a variable resistor to adjust the gain. This allows me to vary the output power quite easily.

The final op-amp inverts the signal for the second fet (effectively a 180 degree phase shift).

The primary centre tap of the toroid is connected to the big 2200uF tank capacitor, and is protected from feeding back into the supply voltage by a diode. I have used a schotkey diode for its high current rating (im not sure what it is as I haven't looked at the datasheet), this thing pulls a LOT of current at full load so be warned. 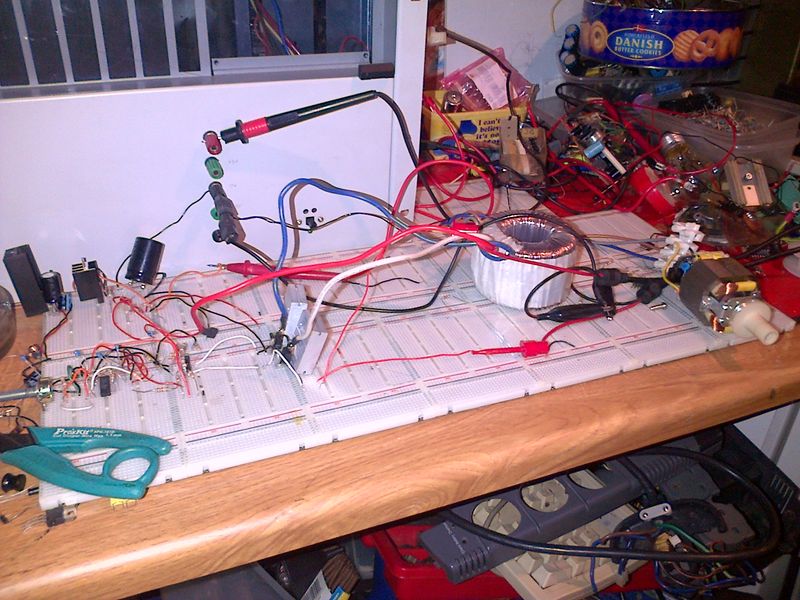 Here's a picture of the whole setup running a small mains powered motor. note the big juicy toroid. It might be a bit hard to see from this photo, but the motor is running quite happily. 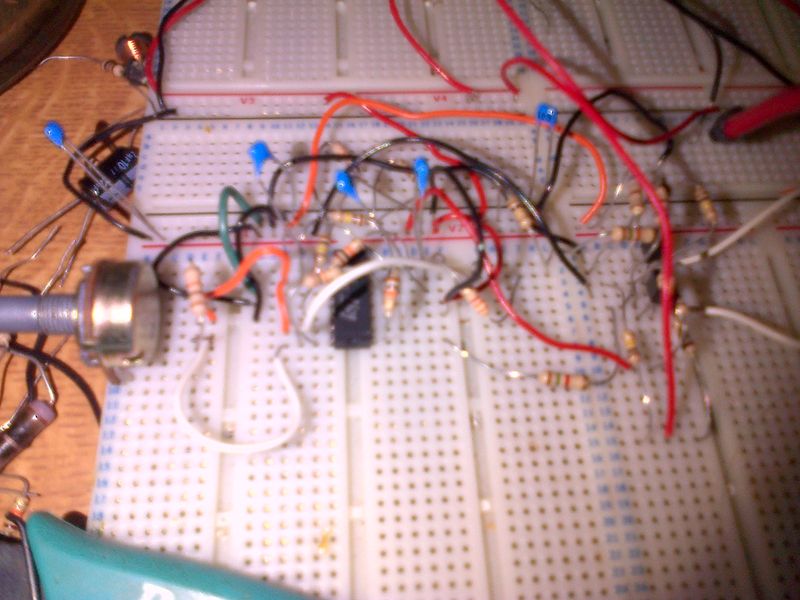 Here's a closeup of the oscillator stage. 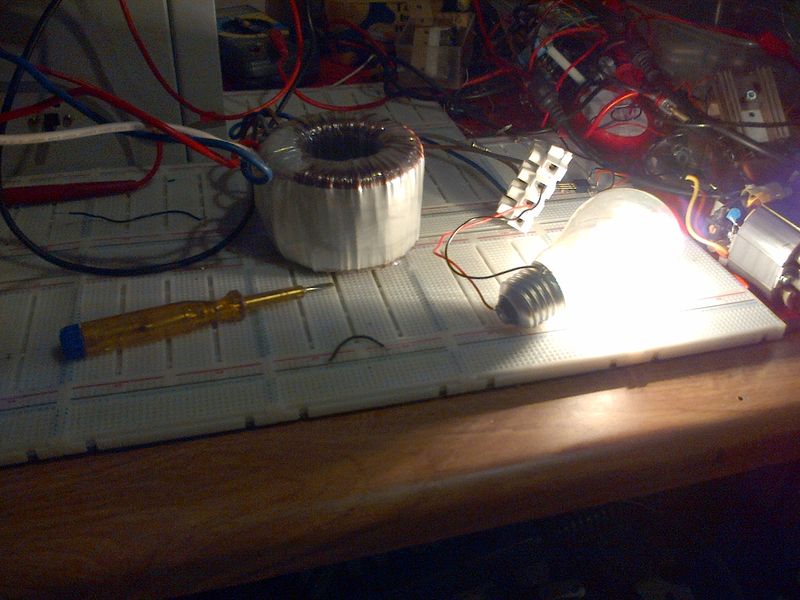 This is probably a better demonstration of the output, a lightbulb!

All in all it works rather well so far. It can power a 240v 60W light bulb quite nicely, and even a small motor. The variable gain control allows easy adjustment of the power output to dim the bulb or adjust the speed of the motor. With the light bulb on full the circuit is drawing a bit over 6A from the supply. It draws closer to 8A with the motor connected.

Here is the scope trace at the FET gates, Scope settings 5v/cm, 10ms/cm at various power levels. The third image shows gain has been turned up to maximum and has become more of a square wave. 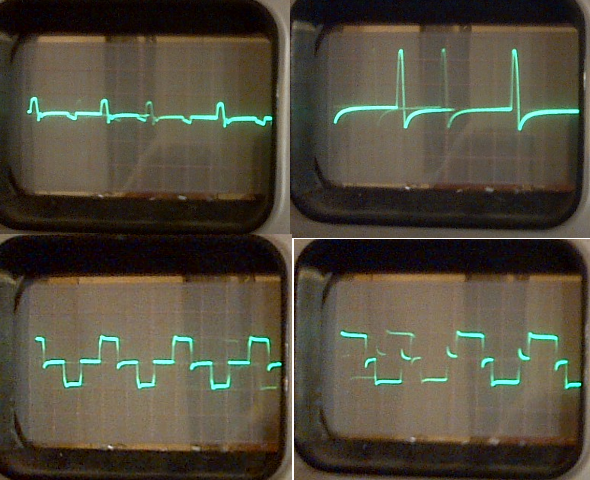 I took some readings from the output and was a bit (but not entirely) suprised. The images above show different power levels, increasing in power from top left to bottom right. The scope is set to 20V/cm, however the bottom two readings were are reduced 11:1 (My scope probes don't have a 10x option so I used a 100k/10k voltage divider.

At full power (before drive distortion) we have more of a stepped function than a sine wave, and is around 440v p-p, however there is a marked amount of 'dead' time where no voltage is present.

The last image shows the output when the gain is at maximum, and the fets are being driven by more of a square than a sine wave. There is much less dead time (however it is still present) and there is quite a lot of crossover distortion when both FETs turn completely off.

All readings were taken when the inverter was powering a 68.4ohm resistive load (The 240v 60w light bulb)

Whilst the inverter is able to provide a decent amount of power, indeed enough to power light bulbs and inductive motors, there is plenty of room for improvement here. I like the idea of using the sine-oscillator and would like to carry this over to a future project. However the output is far from perfect, and not something you would want to run sensitive equipment from. I will be looking to construct a full H-bridge at some point to drive the transformer primary in the hopes of getting a cleaner output from the system.

update: I am now toying with the idea of using a pwm signal to drive the H-bridge. A bank of capacitors in conjunction with the transformer primary would act as a low-pass filter to recreate the sine wave where it is needed. In theory this should be a very efficient manner of driving the business end of the circuit, with very minimal energy wasted as heat.