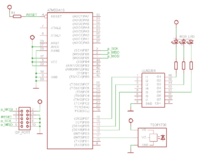 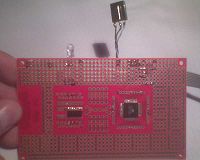 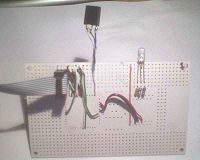 The idea is to make a moodlight and install it behind my LCD screen. I want to have the possibility to change the backlight's color. Hopefully it will give a nice effect.

The device will not be too complicated - just a mix of: AVR MCU, few RGB LEDs, IR receiver and few wires.

Since i already had AtMega16 and TSOP1736, the choice of hardware wasn't hard... I just had to buy some proto-board and few LEDs. The device will be powered by external power supply, so far though it's using the "supply power to target board" option of the STK500v2 programmer. LEDs are drived by three 8-bit PWM channels (T1A, T1B and T2). Three MCU outputs wouldn't handle too many diodes, so I've decided to use ULN2004 Darlington Array to amplify the output current.

This is the part where domen was really helpfull. It's the PWM modes that i had troubles with. Guess what's the MCU? No! It's Atmega16. Domen helped me with it... (and so on... ;-))

I've some Philips remote here, so it's gonna be RC5 code receiver that i want to build here. It's close to working, however it requires some more adjusting. Gonna update this (yes, this one too) section later, maybe even provide some drawing.

There (on the right) are few pics of how it's looking so far. Yes, HD quality ones.

Just another unfinished thingie. Gonna update this site when i finish it.