We have all been there, having a piece of hardware that would sometimes not start, we just said to ourself "its okay, I know how to work around it" and went on powering on and off a few times untill it started. At some point, this stoped working or we might become afraid to turn it off, in case she would not come back on. - Admit it, it is a problem that needs to be fixed

ACTUNG: this only works for electrolytic capacitors.

BEFORE you start randomly desoldering capacitors, you must note the following of each:

Based on the above note info, searching for replacement can begin. Be sure to get low-ESR rated capacitors for anything incorperating a switchmode, this includes but is not limited to, computer motherboards. For some popular computer motherboards, there is allready kits out there with capacitors needed. If you do not trust there quality, you can always copy the info and get your own :)

Do not hesitate to go from 85 C to 105 C capacitors, the price differance is almost 0.

Your local pusher might now have LOW-ESR caps, if he gets a funny look in his eyes when you say "low esr", walk away slowly.

Farnell / RS-components probably have what you need, but they also are damn expensive.

Ebay have it too, but it might be capacitors made of cardboard and vinigar, you never know..

Rule no. 1: LOOK TWICE ON THE POLARITY OF THE CAP!

Rule no. 3: DO NOT assume the silkscreen is correct! look at the cap you take out.

Now, put it all back together, a series of pictures of you taking it apart would be a good idea to have now. oh, Should I have mention that in the start? 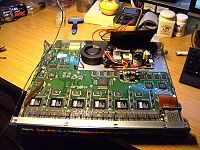 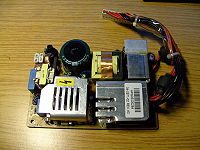 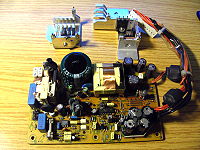 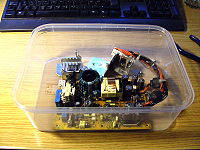 Time for a practical example, a Cisco Catalyst 3500 switch, that would not start after a power-down for +1h. guess what, bad caps!

Diagnose: it was proved that she would start after heating it with a hairdryer, yay!

Taking it apart: pics or it didn't happen. most caps were hidden under heatsinks, thiese were de-soldered from the board, including the semiconductors they hold. One COULD start testing with a ESR-test to tell what caps were bad, but as it is very visible on the board that this lives a HOT life, might as well change all or it will die again within the next year or so.

So, 11 caps, thats not too bad, they were all 105°C, but we know nothing about the quality - hopefully we can do better.

Elfa.se came up with the following:

Rejoiced over those low prices compaired to Elfa, that it turns out I cannot shop at, not easy anyway, the 6 capacitors on the switch/router board itself, an extra DC-stepdown converter after the main psu, was deimed for replacement as well, 4 x 100uF 10V, the 35V found for the main PSU will do, so 4 more of those, then 2 x 470uF 25V. Conrad part no. 442625. 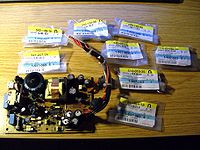 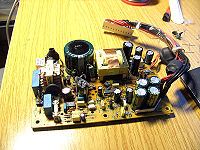 During the replacement of the caps, a measurement of ESR was done on each old and each new capacitor:

All replaced, heatsinks+semiconductors reassembled and she starts the first time, exelent.

What can we learn from this? well to start with, no ESR value was much higher on old caps vs. new caps, but some of the caps, the 120 uF ones, did leak a bit from the bottom when desoldered.

ESR can tell us a lot of the state of the capacitor, but perhaps this set were just not that far gone yet.

UPDATE: Made the rookie mistake, desolder cap, measure it == cap being measured in hot state == more likely to work (that is why the blowjob/hairdryer trick works) Table above is updated with ESR-measurements on old caps, number in () are cold values. We now see the 3900 uF caps give a reading, 0.05 vs max 0.005 (assumed threshold of rounding to least significant digit on display). Also the 120 uF were somewhat high relative to the new ones, but still well within "normal" limits according to the table on the ESR meter.